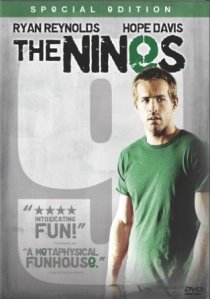 Finally a movie that made me think on several levels. First it needed some brainpower to figure out The Nines‘ plot, recreating a linear timeline from a zigzagging one. I decided that it is not really possible to think of it in one dimension, because the three parts of the movie are mutually nested into each other. The first part (“the prisoner”) is about a crack using heroin addict who gets house-arrest for burning down his house. His neighbor and his PR-person, who eventually moves in to babysit him, are at odds with each other covering different aspect of a larger mystery. The second part (“reality television”) is about making and pitching a pilot for a reality TV series, while the creator of the upcoming show himself is the star of a reality show himself. The same three main actors are playing the part of the director, lead actress in the planned show and the network person. The network woman pushes the director to drop the main actress from her show, because she is plus sized. He eventually bends and fires her, but his show doesn’t even make it to “upfronts,” where advertisers can view upcoming shows to decide where to put their advertising money. In the third segment (“knowing”) a videogame designer’s car breaks down after an excursion to nature. He leaves his wife and daughter at the car and goes for help. He meets a woman who offering help lures him in the depth of the forest and plays mindgames with him.

That’s the outline of the story, but I left out the references that are made in one piece to the other. For one most just the major but most of the minor characters were played by the same actors in all three segments. In the second segment we learn a little bit more about what happened at the end of the first. Similarly I the third, even more details come clear about the first two. But it is hard to describe and I want to leave some reasons for the reader here to check the movie out.

The second area I was wondering about was the movie’s overall metaphor. There are at least two ways to interpret it. One of them is that all we’ve seen was within the framework of a videogame. This is supported by the closure of one of the three segments, where we see a typical computer dialog telling us that the game is over and asking us whether to cancel or exit. (The invisible operator chooses the exit option.) If we opt for this explanation then the movie is about simulated reality. It might represent how we are all game figures in a big game, controlled by a player. This would make the movie similar to Chumscrubber.

On the other hand the movie could be about religion. There are plenty of references in the words of the movie to suggest so. The female characters’ explanatory words to the main man are empowering that way. They tell him that he is a multi-dimensional being with infinite powers. He is also referred to as one of many manifestation of G-d, an avatar if you will. This would suggest that the religion depicted is Hinduism or Buddhism. On the other hand this card is not played out entirely. He is G-d with a free will. Even when he is told that he needs to abandon his creation he can opt not do so and to remain. Except that he eliminates the created world and right away starts a whole new cycle. So maybe it is Hinduism we are shown, because that has more of cyclical world view. Or maybe there is no direct relation to any religion and the driving metaphor of the movie is that it is all G-d’s creation and we are just pawns on his chessboard. Where he planted himself as well to play along with us.

Finally I was also trying to figure out what the message is, what the auteur’s intentions were. One message easily grasped was about how (badly) plus sized actresses are treated in Hollywood. They rarely get prime roles, despite their abilities and their friends’ best efforts. I used the word “auteur” above, because John August both wrote and directed the movie, this is his vision. He wrote a number of great movies, including Go, Big Fish and Corpse Bride. But this is his first feature film, having directed an 11 minute short, 10 years ago, titled God, where the same plus size actress chats with G-d on the phone.

Another possible idea August might have wanted to get across was how tragically funny it can be when man think of himself as G-d. I’ve seen an interview with him, where he shares in what aspects this movie was autobiographical. I suppose directors sometimes think of themselves as G-ds of a small world. He did not say so, instead talked about how the conversations in the movie were similar to the conversations he partook in the past. Apparently he was interested in capturing complex relationships. That was something that I did not focus on while watching. I am sure that there are plenty of other sides that will reveal themselves at a second viewing. It is one of those movies that deserve a second occasion to discover more layers.