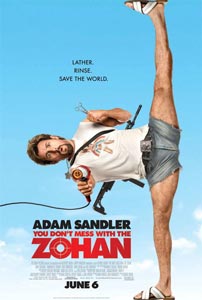 It’s quite rare for me to dislike a movie this much that I wanted to like. I wanted to like You Don’t Mess with the Zohan because one of its messages is that Arabs and Jews should live in peace next to each other. That is a cause I support wholeheartedly. The story line (“An Israeli Special Forces Soldier fakes his death so he can re-emerge in New York City as a hair stylist. “) was promising enough for me for a good comedy. It had potential for good laughs, but they went for the low-brown version instead. Finally, I also wanted to like it, because I hoped it would show some Jewish humor.

Instead I got a big dose of the usual Adam Sandler humor, albeit slightly less gross than most of his films. Still, the majority of the jokes were the kind of sexist type I told in third and fourth grade. My excuse was that I did not know better. Sandler’s excuse was that he hoped it would make money for him. It was boring and disgusting for me. The over the top Israeli accent in English was funny though, but even that became an exaggeration that was overplayed. I guess I was not the target audience the movie was made for. Enough said, don’t waste your time or money on it.