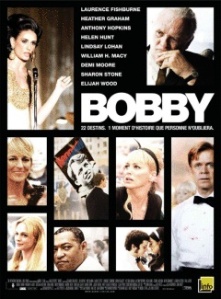 No matter what the critics say I found Bobby a great movie. I was awed by the number of stars involved. And not just because they were well-known, but because they are great actors. Here is a partial list to give you a scope (sorry I only list those I like): Harry Belafonte, Emilio Estevez, Laurence Fishburne, Heather Graham, Anthony Hopkins, Helen Hunt, William H. Macy, Demi Moore, Freddy Rodríguez, Martin Sheen, Christian Slater, Sharon Stone, Elijah Wood. I knew that Bobby was directed by Emilio Estevez, but I was surprised to learn that he wrote it too. I was surprised, because I thought it was well written, and did not think that Estevez did ay writing. Turns out this was the fourth movie he wrote the script for.

I also appreciated the history lesson. I knew little about Robert F. Kennedy, besides that he was killed a few months after MLK. With the use of contemporary newsreel segments and recordings of his speeches I learned some of his ideas. I was surprised how progressive he was: talking about air pollution in the cities in the 1960’s, and suggesting, that a combination of government regulation, industry changes and responsible citizen behavior is the solution seems pretty visionary for me.

I recognize the “liberal agenda” in the movie, showing RFK as a positive only figure, who could have taken the country to a new direction. But I found nothing wrong with this approach. I guess I should do m own research now and learn more about his (planned) policies, but I doubt that I will. Thus I will make the same mistake I thought others would be doing. I often object to Oliver Stone’s films with historical themes, because I am concerned that unsuspecting viewers would take them as 100% historically accurate ad would not educate themselves to learn more of the “real” history. Here I am now, having learned the very little I know of RFK via a movie and not willing to spend more time on it. The difference, i.e. my excuse, is that I know that most of the movie, including all the characters was fictional, and the authentic documents included were selected with a specific goal by a specific team. I surely will not think that I have an in-depth understanding of RFK and the era he lived in based on this movie, but my views and memories will also surely be heavily influenced by the movie.

Having said that, I still don’t care, I still enjoyed the movie and was happy to see it.