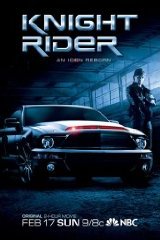 I know that when I was a teenager I enjoyed the Knight Rider TV series in which David Hasselhoff teamed up with a sports car revved up with artificial intelligence and other extras to fight crime. I remember the feel of medium testosterone level watching it as a 14 year old, but none of the actual story lines. “Medium” testosterone, because the fighting scenes were less dramatic than current violent movies and series, but the fast car chases and risky situations did provide some macho excitement.

Having all these memories I was looking forward to the new reincarnation of the series that was kicked off with this 80 minute TV movie aptly titled Knight Rider. I did not enjoy it at all. I thought that maybe because I am not a teenager any more. But then I realized that it was pretty bad acting and the story was mostly there to create continuity between the old story 25 years ago and the new version. I watched the second half of the movie in the background only; otherwise I would not have been able to endure the full length. I even watched the first 10 minutes of the first episode of the new series afterwards, but that was even worse. I give up on this. Maybe today’s 14 year old boys can enjoy it, but I just want to keep the vague memory and feel from the 1980’s and forget this.