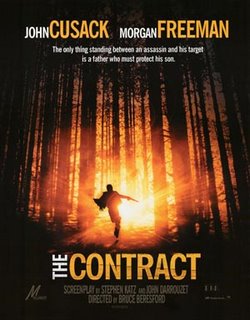 I would watch almost anything with Morgan Freeman. His deep voice can be funny, scary, and mysterious at the same time or in any combination. His solid, slow demeanor often suggests coldmindedness and that was exactly the idea in The contract. I would watch almost anything with John Cusack. He managed to get over being an 80s teen sensation, even if he was never exactly a hearththrob. A main characteristic of his lovable characters both in independent movies and in some big budget Hollywood productions is his loving nature. Just like here, where he cared so much about his teenage son who is having a hard time grieving about his mother’s death.

Daddy gets the idea that they might be able to get over their bonding difficulties with a hike. But early on they stumble onto Freeman’s character, who is a criminal mastermind running away from the police. His men and the police are after the three of them as they are hiking through beautiful terrain. I won’t bother you with the rest of the story as its twists and building tension are the main attractions, beyond the stars. As you might guess it is much as about the bonding between the criminal and the “normal” people(, who under extraordinary circumstances commit heroic acts) as much about the chase and uncovering what Freeman’s person did in the past. In the end various versions of honor is preserved. It is a treat two watch the two main actors and the rolling mountains. As for the story, it was simple enough, but nothing special.