On my list of (top 1000) movies to watch is Howard Hawks‘ Rio Bravo from 1959, of which Assault on precinct 13 is a modern version. (Off topic musing: Can I still call it modern if it was done 30 years ago. I guess not because Assualt was redone again in 2005. Is this how it will be going from now on? Good movies will be redone every 20-30 years to suit the visual and cultural taste of newer generations?) 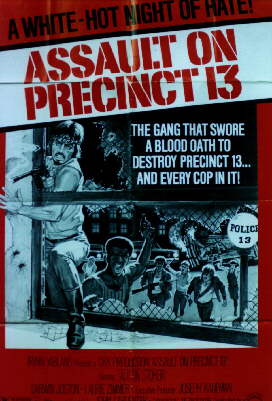 The story is simple: a police station, which is about to be closed down comes under siege by criminals with only a few people, mixture of officers, civilians and jailbirds, being there to protect it and themselves. What makes this movie great is not the story, but the desolate atmosphere. The going back and forth between no background music and stripped sound of a few keys on a Yamaha synthesizer support the creepy feel of the liminal space. Liminal in the sense, that the police station is halfway packed up; it is here and not here at the same time. Same applies to the people. The prison bus that had to make an unplanned stop here for medical reasons; the lieutenant who got the gig of overseeing the move on his first day on the job after returning from a break; the assistants, who worked there for five years and now ready to move on; the father whose daughter was shot down, went after the killers and then escaped into the station … All of the characters were just passing by when they were forced to make a stand. That they did and Carpenter was kill-happy to show us the carnage of the siege. BTW: At one point “The siege” was the title of the movie. First it was intended to be “The Anderson Alamo,” but at the end the distributor changed it “Assault on Precinct 13,” despite that in the movie itself the location is referred to as precinct 9, division 13.

If you are looking for social commentary I guess you can find it in the representation senseless violence of youth culture from the Los Angeles wastelands. Particularly the shooting of the young girl with ice-cream in her hand. The wordless execution scene could be an emblem of the era and its problems. Not being familiar first hand with this subculture, but having read about the periodic waves the “adult” society tries to keep teenagers in control (think back of reactions against garish comics, rock music, punk aesthetic…) I cannot stop thinking that it might be exaggerated here as well. Maybe the kind of violence shown here is not as frequent as one would think. We know that John Carpenter, who directed this film soon after he finished school, became the master of gloomy horror/suspense movies; i.e. he was predisposed to see the darker side of life. If you want see it too and not opposed to violence, check out this early, tense masterpiece.