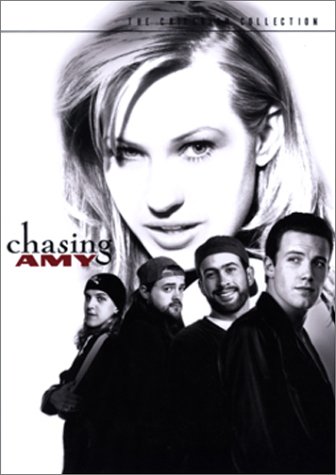 Kevin Smith is a part-time genius. His first movie (practically) was Clerks, which was so new in style and content that it took some time to get into it. Once I got it, I loved it. On the other hand everything that was right with Clerks, was wrong with Clerks II. Then again Dogma was terrific, but Jay and Silent Bob Strike Back was not. I haven’t seen Mallrats and Jersey Girls yet, so I have not opinion on them. But now I filled a gap in my Smith history, by finally watching Chasing Amy. It was recommended me so many times, that I lost count. Luckily enough nobody told me what it was about, so I had no preconceptions.

It is a brutally honest movie about a 20something guy falling in love with a woman who identifies herself as a lesbian. Their budding relationship and his conflict over her with his best friend and roommate is in the focus. By brutally honest I mean that the characters speak their mind from the heart; they are having exactly the kind of conversation we were having at the same age. The script contains some of the most cleverly intimate dialogs I ever heard. IMDB keeps a “memorable quotes” page for most movies. This one has the longest page from the movies I encountered and rightfully so. Just reading them through is a lesson on gender stereotypes, male and female coping mechanisms, pent-up and let-down emotions. These are the themes that the movie explores in a refreshingly straightforward way. I think this should be shown for high school students. It would help them to encounter their own fears, misconceptions and install sincerity in them.