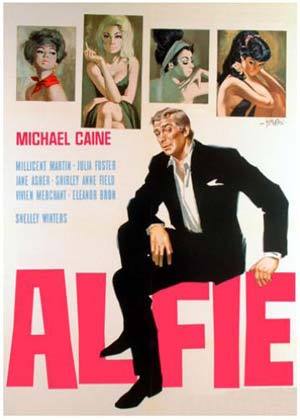 I still haven’t seen the new Alfie, from 2004 with Jude Law. This is a good thing, because this way I could enjoy more the original Alfie from 1966 with Michael Caine. My joy was mixed though. On one hand there were plenty of comedic elements in the movie. The use of “to the side” trick (i,e. the actor talks directly to the audience/camera, explaining some of his thoughts, just like ) were surprising from the very beginning. But it was painful for me to watch such a selfish person go through life without getting a kind of punishment my sense of balance suggested he would deserve. While he was babbling at the doctor’s office I was actually hoping that he would get diagnosed with a serious illness, and I am not a mean person usually.

The story is simple enough: it is the life story of Alfie, a man who uses women as he wishes, without ever committing himself to one. He seems emotionless; he is guarded to the extreme. There are only three scenes where we can detect unwanted reactions from him: when he plays with his son (whom he wanted nothing to do with), when he runs after the first woman, who ever left him (and not the other way around) and when he encounters an aborted fetus in his kitchen. But even these scenes are tainted. During the first one he keeps talking about his attachment and we do not actually hear him talking with/to the child. In the second scene he only runs after the woman after he smelled the cake she left for him in the oven; only this made him realize what he would miss if she left permanently. And in the third he manages to have a decent thought (“I am a murderer”) but this does not stop him, abandoning the woman, who just aborted.

Besides the obviously engaging story-line, the movie has great writing, acting and clever camerawork. The overhead shots of running around in nondescript 1960’s English suburbs, the barfight accompanied with live music, the puppy love, were all well-orchestrated. Their unusual angles provided additional meaning. The music, i.e. Sonny Rollins improvised saxophone solos, show a free attitude similar to the protagonist’s.

All in all he provided the anti-role model for me. His motto, “You got to look after yourself in this life,” is too limiting for me. It is true, but not enough, not altruistic enough for my taste. I found Alfie’s use of the belittling “bird” term for woman outraged me. He said “I don’t want no bird’s respect – I wouldn’t know what to do with it.” I am just the opposite, I like being liked and respected. I thank the film for reminding me what I do not want to be.