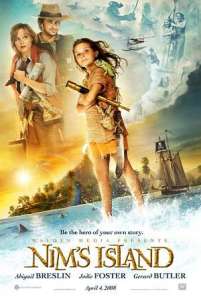 I really like Judie Foster and haven’t seen her for a while. At least that’s how it seemed, but checking on IMDB I can see that she made one movie every year since 2004 and I have seen most of them. Compared to other actors, who make 4-7 movies a year she keeps herself busy in other ways. For example mothering her 10 and 7 year old children. Being a parent probably helped her decision to sign up for Nim’s Island, where the protagonist, Nim is young girl, similar in age to her elder child.

It is a sweet little, predictably story, colorfully executed. Nim lives with her scientist father on an exotic island. He disappears and Nim asks help from the adventure writer she adores, played by Foster. Foster overcomes her extreme claustrophobia and rushes to help her. From that point on the story charges on towards its unavoidable happy end.

The high point of the movie for me was the imagined and the tropical scenery and their mix. With every movie she makes, though, it is getting harder t o imagine Foster playing a light character in a comedy. Even in this kid movie she managed to grab a role with multiple phobias. Thus her happiness at the end does not seem genuine enough in my eyes. Other than that it was it was fun, light entertainment.