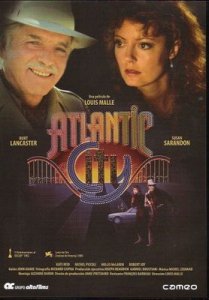 There are many things to like in Atlantic City, despite being a depressive movie. First of all Burt Lancaster and Susan Sarandon are terrific. The former plays a man who likes to think he used to be somebody. The latter plays a woman who likes to think she will be somebody, but meanwhile she is shacking oysters and learning to become a croupier in the booming Atlantic City. Other characters include her ex-husband, who shows with her pregnant sister and big packet of stolen drug. The story follows what happens with the drug, the money it is sold for and the people who touch it. As some of them die, it could be considered an anti-drug statement.

But the power of the movie is that instead of being propagandistic it dwells in the description of the people. That’s where French director, Louis Malle, shines, even if the people he shows are not shiny. They are just average people who fight their daily lives, their own pasts and demons. And this is the second thing I liked about the movie, how each character is s full person, not just a caricature, like in so many modern movies, where the viewer only sees a limited fraction of their human experience.

Atlantic City decided to legalize gambling in 1977 and the movie was made in 1980. It shows the early years of the transformation with its growing pains. The long walks on the boardwalk are necessary, because everything else is either demolished or getting built. The walks also represent movement, the people are trying to go from one place to another in their life, just like the city. Again, some are more successful than others, but the real learning is in the why and how of how people fail and/or succeed.

It is a personal, quiet little movie, with both likable and despicable personalities. Watching it was perfect experience for a fall night.