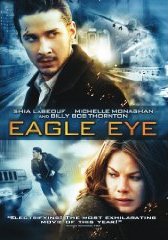 Eagle Eye is yet another movie where the very sophisticated machine turns evil and takes over. I am so tired of this genre. Just once they could show a supercomputer/AI that decides to do good, even by human standards. I guess that does not make an interesting enough story though. But I still think that Asimov’s three laws of robotics should and will be observed in building AIs. Therefore the chance of a machine deciding to go on a killing spree is less likely. But here the first law (“A robot may not injure a human being or, through inaction, allow a human being to come to harm”) was broken multiple times.

Meanwhile the film was a good enough action flick because I didn’t figure out the identity of the bad guy (or in this case woman) till about 15 minutes into the movie. The chases were fast spaced and spectacular enough, the role of clueless accidental hero suited Shia LeBeouf and the mother protecting her son fitted Michelle Monaghan, and the slow scenes were not too many or long. On the other hand the story was formulaic; there were very little surprises in store for us. We even get the predictable speech at the end about morals and machines. Overall it was a good enough background movie, which I will probably forget in a week or two.