Yesterday I finally watched two movies I wanted to for a while. I heard only positive opinions about them. They were both made in the US, in 1995, the year I moved here. That is the main reason I missed them when they came out: in my first year I rarely went to the cinemas.

They both surprised me pleasantly. In the case of Clueless I was expecting a movie with shallow characters only and a storyline that shows how shallow people’s lives are empty, devoid of value. Yes, there seemed to be plenty of superficial characters in it, but they were unexpectedly complex. For example Alicia Silverstone‘s character’s, Cher’s little speeches during debates were right on target, despite their content and style. The essence, the comparative analysis they provided for the topic on hand were accurate. Also the girls’ “charity” of taking on educating the new girl about the social landscape of the school and expected behavior seemed to come from the heart. 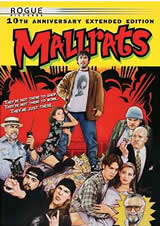 I was expecting Mallrats to be a boring film in the vein of Beavis and Butthead. I thought that it would be all about kids hanging out at the mall, doing nothing. I thought it would show another kind of shallowness, people’s whose high point of the day is to loiter around the mall. Instead it had a real story line with lots of action, the “kids” were twentysomethings and some of the movie took place outside the mall. Furthermore I forgot that I should have expected clever writing and dialogs from Kevin Smith, based on his other movies I seen (Clerks, Dogma, Chasing Amy.)

The cultural references (the music, the cloths, the huge cellphones, the brands…) put both movies squarely into the mid-90’s. As I mentioned above it was a transitional period in my life, so I am less familiar with them than for example with the early or late 90’s. These movies helped me to get a closer feel for the era and remind/teach me of what I missed. Shopping though was never as central for me as for the characters in these movies. Their experience is vastly different from each other because in Clueless they had money and they used them in upscale shops. While in Mallrats they did not have and the location was a cheap suburban mall. Nevertheless consumption seemed a central theme in both, but it was delegated to the side by the real love stories.

Next time I will not watch them as a double feature, because they set/require different moods. But there definitely will be a next time to dive more into them. I am sure I missed a lot of good lines, inside jokes, clever background objects in both.