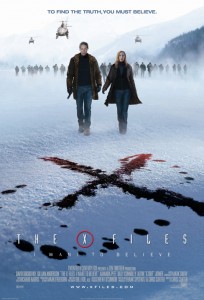 I have seen only a few episodes of the original X-Files series and the first movie, so I didn’t have extensive background knowledge or expectations when I watched the second movie: “The X Files: I Want to Believe“. Nevertheless I a had the feeling that its story would have made a better TV episode than a whole movie. The gruesome crime and mystery was OK in its genre. The drama of the doctor and the child with an untreatable disease, however, was superfluous and much better done in other movies. I also understand that the writers had to keep the romantic tension between the two (ex-)agents shrouded in a mystery. These elements added nothing to the movie for me, but I assume for long-time X-files aficionados had lots of clues and references back to past episodes.

The homophobic aspect of the movie I cannot leave unsaid though. One of the main characters was a pedophile Catholic priest. The question whether he is guilt of any other crime is left hanging. As it turns out, though, one of his old altarboys ends up being the villain of the movie. He happens to be gay and married (legally, in Massachusetts) to another villain. This setup, particularly their evil practices, on one hand helps to see homosexuals as villains, perverted beings. On the other hand the connection between pedoph8ilia and homosexuality is strengthened by association for the viewers. There are plenty of people already who do not differentiate the two very different concept and behavior, I don’t think this prejudice needs to be reinforced.