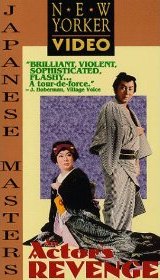 I recognize something grand even if I don’t understand it. I loved An Actor’s Revenge, while being fully aware that I didn’t understand the story and its implications. Nevertheless the visuals, the acting style, the music, the lighting all deserve the highest praise. I never saw a live Kabuki performance so I cannot compare it to that. But the movie is and built around one. It is so much more as a recording of a stage play. First of all the actors come off the stage and mingle with the audience. It is impossible for me to decipher whether they remained in character or were truly themselves even offstage. Meanwhile I also need to remember that I was watching a movie, so even the offstage actors are just movie actors, who are acting. So many levels of deconstruction.

The movie reminded me of the performances of Studio K, a theater group from Hungary where the demarcation line between stage and audience was consciously removed. They played classic Greek dramas and modern Hungarian/European plays as well. Similarly this play/movie had the grandiose arc of tragedies form the antiquities. Murder, revenge, love, generational differences, class differences, prejudice, deception … these are all present, although I could not untangle all the threads. The basics of the plot are clear: an actor schemes and executes a revenge for his parents’ death decades after they died.

However for me the story was much less important than enjoying individual scenes. Those scenes had the strongest effects on me that started off in a well-lit room (or stylized outside environment) and change into a black screen with only an extremely expressive (and made-up) face lit. The camera for most cuts was stationary but occasionally it moved in a straight line, like from skylight of a room to the eyelevel. The film is packed with individual cuts that are worthy of study, analysis and even to be taught. I want to see the movie again, breaking it down to pieces, because I believe it has a lot to teach me about composition.