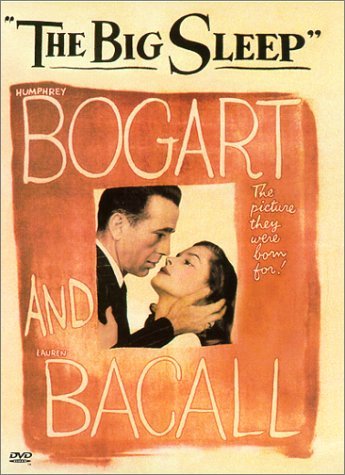 I must have seen most Humphrey Bogart movies because when I was a pre-teen there was a long running series on TV of them. That was one reason I learned his name. The other, that one of my favorite Hungarian underground rock bands (Sex-E-Pil) had a song with a line mentioning his name: “Humphrey Bogart a teveben eppen egy ajtora lo” Meaning “Humphrey Bogart is shooting at a door on TV right now.”

In The Big Sleep Bogart, as detective Marlowe shoots all over, although I don’t recall him targeting a door specifically. But, certainly, there were at least three people shot dead in doorways while him being present. Shooting and fighting was a major part of the action. However, by today the stylized, unrealistic ways these scenes were done seem old-fashioned. I enjoyed though, because it was clear that no actors were damages while making this movie. With all the explosions and heavy machine-gun fires you can see in today’s thrillers this provided the kind of calm needed to follow the story. I was not distracted by the fake violence. However the plot was a bit too complex for me. It ran on many dark threads than joined in my head only at the end.

The funny or sad thing, depending on how you look at it, is that I didn’t recall Lauren Bacall‘s, the movie’s female lead’s name. Having read upon her she turns out to be Bogart’s real life wife and apparently equally famous. I blame the Communist censorship media which prevented some of the Hollywood glamour world to be spread in Hungary. It’s never too late to discover her: in the Big Sleep she acted, sang, joked like a real diva should. It was fun hearing her poking Detective Marlowe about his height, while being aware that Bogart was indeed shorter than his wife.

The movie itself was a blast. Howard Hawks directed it with his precision, fast space attentive style. There were at least as many shady characters, dark corners, gloomy rooms, and deep secrets as you would expect a classic film noir. Having an affinity for books I also enjoyed the library and bookshop scenes, although in both the emphasis was placed in Bogart’s (successfully) flirting with the librarian/clerk. Is it possible that the “sexy librarian” stereotype originated here or was the movie just using the existing image?

I am glad I caught up with this classic. For a good time, mind-twisting puzzles, great performances you should too.