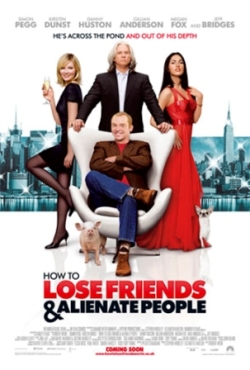 Romantic comedies often bore me with their predictable turns and outcomes. But “How to Lose Friends & Alienate People” had enough oomph and comedy in it to avoid this fate. It is a sweet little film about a British journalist (i.e. anti-intellectual intellectual), who sells out at the first calling word of a New York fashion magazine. He shlepps oer and acts like a small-minded Brits in a posh or even just office working setting. Here he fails in following or having any sense of etiquette he makes up with his originality (at least that’s how being a European looks like from the US) and eventually his true and pure heart. The whole movie was smooth, even when he danced in the middle of the night for punk music in his cheap rental. Not much to add, beyond that I think all main actors (Simon Pegg, Jeff Bridges, and Kirsten Dunst) are capable of much better acting in more serious films. They had ti easy so they played it easy in this flick.