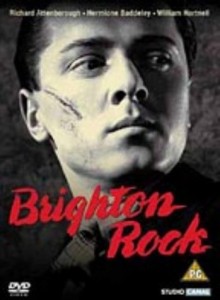 Lord Richard Attenborough will be 86 years old on Saturday. To celebrate I watched one of his early movies: Brighton Rock, aka Young Scarface. In it the Attenborough plays a young but cruel criminal who works in the shadows of the bright tourist town of Brighton. In order to save his face he woes and marries a 17 year old waitress, who could be the only witness to one of his murders. When things don’t play out as he planned he even tries to kill his young wife. He cannot save his face though literally: it gets sloshed by a mob he tried to turn against somebody that also turned against him. Attenborough is brilliant as Pinkie, the babyfaced savage. He clearly learned form the greats of the silent movies as he showed so many emotions with very little words.

The very last minute of the movie brought a surprise to me in the level of its optimism. Anything to save an innocent person’s faith, after her fate has been saved.