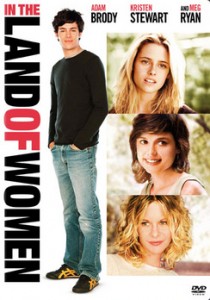 Adam Brody–who has been acting for 14 years and even in successful series but I have never seen before–plays a 26 year old lad who goes to the countryside to help/live with his ailing grandmother to recover from being dumped by a fashion model. He does this in the movie titled In the Land of Women, where he does drop into the land of women indeed. Besides his odd grandmother (played by spectacularly by Olympia Dukakis) the only people he seems to have contacts with is his neighbor and her daughters. The neighbor, Meg Ryan (for whom this was the first movie role in three years) has cancer and a cheating husband. Her older, teenage daughter has a big fear and the protagonist helps her to get over.

There is more to the story, but gives you enough of a sense of what to expect. It is a nicely balanced drama with a hint of comedy, where the acting was rather enjoyable throughout. By balanced I also mean not as heartwarming as to be kitschy, not as tragic as to be depressing, not as happy ending as it would seem syrupy.