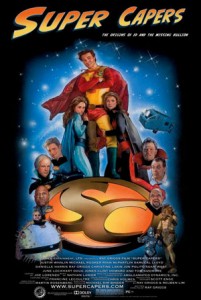 I wanted to see a light movie so I got Super capers, which primrosed to be a parody of superhero movies. It was a bad choice. The acting was awkward, the action predictable and the jokes flat. the script was unimaginative, full of potholes and blatantly borrowing in the name of parody. The basic idea had so much more potential in it: a regular guy who wants to be a superhero end up being in a halfway house of dysfunctional superheroes. It could have been a character study (like Watchmen in many way is), a sit-com, a funny kids movie or even a proper superhero movie. But it was just a bad mix of half-baked ideas instead. Avoid it.