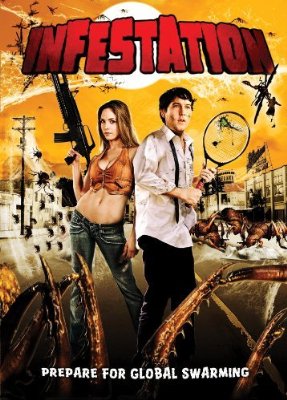 With the exception of the actor playing the protagonist I didn’t know anybody in “Infestation“. Even he, Chris Marquette, was just vaguely familiar from the TV series Joan of Arcadia. This and the lack of expensive visual effects made me think of the flick as a “B” or even “C” movie. Once labeling kicked I could enjoy the movie more as my expectations got lowered. I soon realized that if I think of the movie as the movie “Office Space” or the sit-com “Office” without that familiar characters and with half as many or funny jokes (but with giants bug attacking the crew) it will be fairly enjoyable. The comparison is fairly unfair as the office setting ends pretty early in the movie as the little group that survived the initial coma inducing attack gets on the road towards assumed safety, but by then my mind was set.

There is awkward chemical tension between males and females, there is father-son relations to work out, and there are heroic features where one would not expect. The day is saved of course. Lots of clichés used in the visuals, which otherwise are fairly well done. The dialogue is mixing well-known formulas too, but some of them still seemed funny when I watched the movie. But they passed as now, weeks later I don’t remember any of the punchlines I thought at the time as gracious enough.