Friday night we had Sabbath guests. They came early enough, 6-ish, so I didn’t feel too rude when I left at 9 PM for a concert. I drove over to the Chrome Lotus in Santa Rosa. As I got there at 9:20 I was concerned whether I missed anything from the show that was supposed to start at 9. I didn’t. The support band didn’t even start till 10 PM. This way I had plenty of time to look around. The venue had a front room with a few pool tables, and another front room with a bar, a middle room for VIPs that had a window to the back room. The concert itself was in the back room. To get I there you had to pay $12, while to get into the bar itself cost only $1. I assume this nominal charge is a deterrent to unwanted people who cannot even afford that. The back room had its own bar, but no chairs just a few stools and a bench. Thus I mostly just stood there for 40 minutes and watched the people. That was fun, but there weren’t too many of them. I would say that before the show 30 people or so lingered in the room.

Right at ten Luv’n Rockets started to play. This is a local (from the North bay of California’s Bay Area) tribute band to Love and Rockets, in which the evening main attraction David J. used to play. The tribute band was a threesome (drum-guitar-bass), just like the original and they did a great job looking like the “real” band. Darwin’s look was so similar to David J’s that later in the evening David called him his doppelganger. I am not that familiar with Love and Rocket’s music and repertoire, so I cannot really judge how well it was performed or whether it was an adequate selection of covers. I can say though that it didn’t sound too good from where I was standing. Too mushy. For one song they invited on stage an accordionist and a pianist. The pianist stayed for a few more. For another song they had a female dancer performing with them. She looked fine and I liked her proto-goth torn mesh clothing. But her dancing was a bit vulgar and jagged too. I don’t think the eye-candy added much to the show, but it sure was something to look at. They played about 45 minutes.

I tried to shoot on videos a few of their songs, but there were two problems. One of them was that my little digital camera kept stalling saying that the disk in it is too slow and the machine cannot record video on it. This was particularly annoying as I specifically bought a risk that was supposed to be ultra fast. So I adjusted the setting and for the second band I used a lower resolution (320×240). This at least worked, but the quality suffered as you will be able to see below. The other problem with my recording of the first band was the noise. Everything I got had such a high noise factor that the music on my video was unenjoyable. Looks like it was mushy not just for my ears, but for the camera’s mic too. I made a few pictures, but didn’t use flash, because I didn’t want to disturb the musicians. Nobody else used flash either, so I confirmed to this. But this meant that none of my pictures came out good enough for me to share them here. I post only one so you would have a vague and blurry sense of how David J. looked like this night. 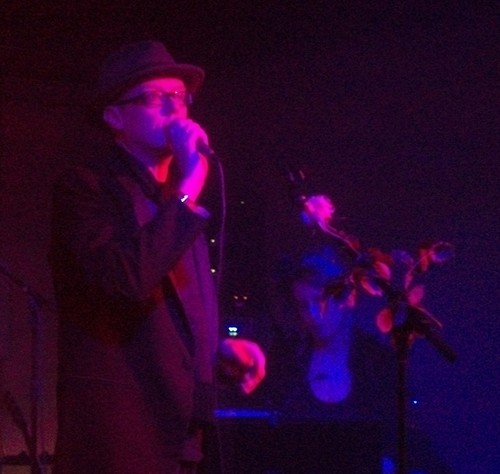 After a 20 minute readjustment of the stage David J and his band came onstage. The two front mikes were adorned with fresh red roses. The guy who played the humongous standing bass had an interesting face I kept thinking that he is either a butler from a British castle, or a character from an Agatha Christie book. I was in the second row of the show at the wall on his side, so I had a chance to look at his mimicry. He was quite an actor too. The blond keyboardist lady was sitting behind her instrument that was standing on a table covered with a dark drape touching the floor. She was the most goth looking of the band. The string player woman had a regular violin and a silver color viola. The problem was that the sound guy didn’t pay attention at the first few songs which one she was playing (and she kept switching them) so after a while she had to shake her upcoming instrument over her head to grab the sound person’s attention in the room. This method worked for the second half of the show, so we could hear her, when she played.

In the center of the stage stood David J. Between songs he came forward and turned the page in the large booklet on a stand. I am pretty sure it had the lyrics for the songs and he used it on and off too. For one song he even said in advance that this one is tricky and he might mess it up. He didn’t. He also frequently went to the back part of the stage to pick up his glass of wine. As the bar gave out all the drinks in plastics cups, David J, holding a real glass looked quite eloquent amidst the plastic people.

Last (and first) I’ve seen him live was in May 2003. Then he played alone, but his music was already cabaret/burlesque style. This evening even more so. He had three and a half cycles of songs. First devoted to Love, second to Death, I didn’t catch the third and then they performed some old favorites. The first two cycles consisted each 6 songs, the third only one. Altogether they played exactly one hour. I managed to record five songs, but not the very first one. Then my battery died. My hand was getting tired anyway, so after this I could enjoy the show without looking through a lens. I didn’t recognize or know most of the songs, so it was very helpful that a friend from a Hungarian forum identified them for me. He is a real fan, as opposed to me, whose musical taste includes Bauhaus, where David J started his musical career, only at the periphery. My friend set up a very comprehensive Bauhaus gig guide where this concert is listed here.

I was annoyed when two women started to talk loudly right under my camera at the beginning of the last song I managed to record. I knew that their conversation would be on my recording. A few chords into the song I realized that it is Rezso Seress‘s (a Hungarian) Gloomy Sunday. When I processed the recording a few days later I heard that one of the women was excited because she was Hungarian too. I wish I had heard that right there. I am looking for local Hungarians and didn’t find anybody who would be n my age group or even close. The fact that there is somebody out here who is Hungarian and even likes at least one artist I like and that I didn’t find it out until it was too late to exchange email address or phone numbers is much more annoying then the few words that ended up on my video. So if you are reading this and you recognize your voice on the last video below send me a message.

I had a fun night. I was surprised to see that the room was full during the support band with about 120-140 people, but by the time David J played only about 50 of us was left. I guess the local band has a local fanbase, while the headliner ended up drawing a smaller crowd. I still preferred his music much more. For one it was not distorted. For second it was more melodic and interesting. For third his n were on a wider scale of the spectrum.

I had three regrets this evening. First, I couldn’t buy a recoding with these songs. I hope I will be able to do that soon. There was no proper merchandise table, just a small round bar table with Luv’n Rockets stickers and t-shirts. Second regret: there was no dancing. Not at the first band, not before and not after. Third, between songs we could here the music coming from the front of the bar. That was annoying and disruptive. Otherwise I had a grand time. Thank you David and crew.