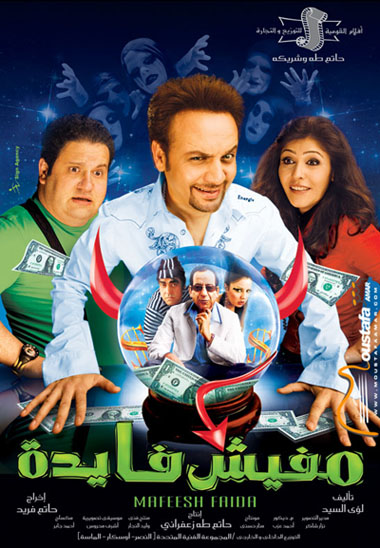 There is no use of trying to figure out what “No Use” is really about. It’s an Egyptian film I saw on a flight, where the transliteration of the Arabic title was given as “Mafeesh faida”, while IMDB has it as “Mafish fayda;” probably both quite distant from how it was pronounced in the original. The story in a nutshell is about a man who lives with his mother and works at a bank, where he got in via family connection. He works in the loan department, where he decides  whom to give loans to on his feelings whether a person is a “runner” or not. Runners are people who take loans and then disappear. His best friends keeps wanting to get married, but cannot. Every scene we see him he keeps shoving food in his face or playing video games. Our hero accompanies his friend to a magician who curses them when he offends him by calling him a charlatan. The curse’s effect on the protagonist is that he starts to have hallucinations and see people’s essence.

Like his friend, and one of his colleagues, is really just a kid inside. The doctor he is sent to for examination is a butcher. Another colleague just looks more and more beautiful in his eyes and I am not afraid to tell you that an innocent romance will develop between them by the end. The conflict comes when he sees that the people he was in the process of approving a huge loans to are runners. But they are evil (not afraid of torturing him and blackmailing him with his beloveds’ safety) and influential (are connected to higher ups.) Eventually, of course, the bad guys will be punished and the good guys all sorted out to receive what they deserve.

My major issue with the move is that I didn’t understand its logic. Why did the main guy got a promotion, after his boss disapproved of his loan approval method? What is the suggested moral of the story: trust your instincts in business deals? Don’t do due diligence as paper work can be forged or misleading? Don’t respect professionals (doctor, psychiatrist, bank manager) as they are all depicted as shams? Is it a pro-superstition film? Really, is this what we want to convey to moviegoers?

I also didn’t like the slow start of the movie, the drug induced scenes, the unorthodox use of cinematic conventions and the inconclusive ending. The last line, “there should be hope,” is about as strong of a punchline as the sleeveless t-shirts our here sheds into as soon as he steps out of his office. I either totally misread the movie, due to the distance in my cultural background to that of the movie’s or it was simply not made for me. I dare not to think that it was a bad movie.

IMDB has no summary.