Patheos is halfway through its series on “The Future of Religion.” First a word about Patehoes from their “about” page: “[it] is the premier online destination to engage in the global dialogue about religion and spirituality and to explore and experience the world’s beliefs.” Based on the further description (see below) it seems they position themselves as the new Belief.net; a place to:

And now about their Future of Religion series: 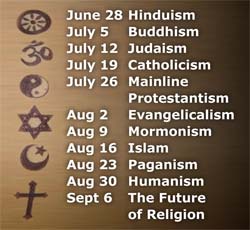 As new forms of worship and belief continue to evolve in the twenty-first century, we have asked thought leaders from a variety of religious traditions to talk about the future of religion. What trends will influence how people across the spectrum of faiths worship and practice? What are the challenges and opportunities that will confront faith leaders? What are the controversial issues? Will cooperation or conflict between religions be dominant in the years ahead? What reform movements will shape the future of belief?

For each week they have between a dozen and 20 articles from prominent and/or interesting representatives of the religion discussed that week. Readers can comment right below the articles and the comments will show up on Facebook as well.

Here are some essays pertinent to the “online religion” topic:

I will post links to more relevant articles at the end of the series, after all of them appear online.