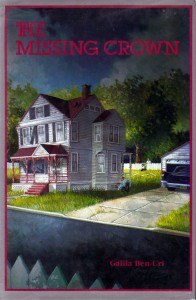 Four kids from Toronto help an Israeli agent and the local police to capture to capture criminals, members of an international smuggling ring. This is the short summary of Galila Ben-Uri‘s The Missing Crown. A slightly more verbose recap would include that the four boys are around the age of 8-12 and are orthodox Jews; that they are helped by their synagogue’s shammas, who teaches them Judaism; that the Israeli agent is chasing a family heirloom, a Torah crown that was stolen from his family and belonged to a famous synagogue in Tzfat.

The “crown” is one of the words I knew in Hebrew first, so it took me  a second to realize what they are talking about. “Rimonim“, also meaning pomegranate, is the ornamental top that they put on the top of Torah scroll, made of precious metal. The one which is missing in this book is made of golden and has little bells on it, that are used to smuggle diamonds. The one on the picture here is from the Brooklyn Museum. 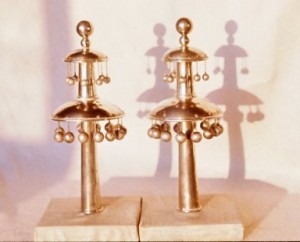 The fast paced story was mixing lots of actions(, including car chase, subway chase, fights), planning sessions, always accompanied with eating piles of dessert and family moments. The events described took place during a summer vacation, starting with the discovery of a suspicious house. This opening reminded me of a book I read several times as a kid “Vakáció a halott utcában” (“Vacation in the dead street”) by István Csukás, but then the rest of the content of the two books diverged.

Unfortunately I found the writing boring and repetitive. The same phrases kept popping up making me feel like I was reading an episode of a 60’s family sitcom. The kids in the book and the supposed readers were both treated as a little idiots and not as developing persons. The vocabulary of the book was mostly appropriate for th 8-10 year old crowd, but every once in a while a word appeared that surely would have required explanation for the age group. The author must have known this too, because the first few times he did weave into the conversation words that shed light on the meaning of the complicated words. Later he abandoned this useful habit.

I also had problems with some of the messages of the book. Using ice-cream as the only reward for good deeds is not something I want to follow, although I can see how that can motivate kids. The fact that there were no girls amongst the kids and the adult female characters were also just footnotes in the book reminded me why I could never embrace a non-egalitarian orthodox lifestyle. I kept hoping that the stories the shammas shared with the kids would be Biblical or from classical Rabbinic literature, instead he made up parables corresponding way too directly to the kids’ current situation and they were not very captivating.

I found that the plot was enjoyable, but the author’s style and message prevented me to be able to recommend the book wholeheartedly.

The book at Amazon.com