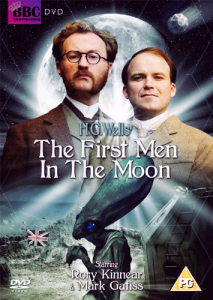 The new BBC Four version of the old HG Wells novel is a funky little piece. First men in the moon is essentially the story of a  guy who needs to leave the city, so he turns to writing at a remote countryside  location, where he meets a slightly mad scientist, who has an idea for flotation. The two of them enhance in each other the extreme and eventually end up on the Moon, where they encounter the locals, looking like the stereotypical aliens with big heads.

The movie was low budget, and it shows on the simple set designs, but I still enjoyed the Victorian feel. But mostly it was the vivid interactions of the two main characters that made me pay attention. The creative tension between the originally subdued British gentleman, who has low moral standards and high interest in material gains and the otherworldly professor, who is just the opposite, creates some noteworthy interaction.

What I found most brilliant  was the move to incorporate a remake of the “Le voyage dans la lune” (A Trip to the Moon) film. Most film historians agree that this was the first sci-fi film, made in 1902 in France. Here we get a fictional back story of how it was created: a documentary shot by our amateur spacemen. I applaud this movie for introducing this important piece of history to the wider masses and providing solid entertainment value with a message too.

IMDB’s summary: In 1969 the Apollo moon landing is to be televised internationally but at a country fair in England a small boy named Jim meets the 90-year-old Julius Bedford who tells him that,in 1909,as a struggling writer, he met eccentric Professor Cavor, inventor of Cavorite, a gravity-defying substance which they used to build a sphere,which took them to the Moon. Captured by ant-like Selenites, Bedford was anxious to make his escape but Cavor was happy to stay and communicate with the Moon-dwellers. Back on Earth Bedford hears via wireless that Cavor was forced to kill himself and the Moon-dwellers to prevent them from invading Earth. As Jim watches the Apollo landing with his parents back in the present he sees a Selenite,hiding behind a lunar rock,peering at the astronauts.