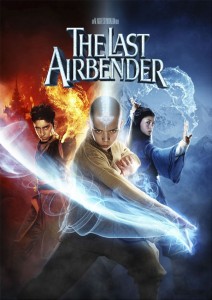 I saw  bored and/or annoyed for most of the time I was watching The Last Airbender. The CGI gurus did their fine work, but the rest of the crew did not. The voice of the protagonist was annoying, the other actors felt stiff the story moved along its predictable path. These elements were simply boring, but the script, the direction and  some the visuals were actually annoying.

I understand that the movie was based on a TV series, that was supposedly better. I cannot judge, I’ve never seen any of it. But the quality of the script for this movie was despicable. Speaking in cliches, invoking unfulfilled pathos,  dialogus of imbeciles, as exciting turns as a snail race … these are just some of my impressions. Maybe it is unfair to blame it on the script, maybe it was all due to the director’s love affair with big empty nothings.

As a person who studied religions a bit I particularly felt attacked when I saw how shamelessly elements of various religions and regions were stolen for the sake of flashy visuals. I assume the director wanted the viewers to feel awe for denigrated esoteric mysticism. Instead of feeling resonance all I I got was a sense of resignation to the dumbing down of religious concepts.

If you really have to see this movie I suggest just watching a few clips on YouTube for the nice colors and shapes and forget the rest. Or maybe check out the series if you are into cartoons.

IMDB’s summary: The story follows the adventures of Aang, a young successor to a long line of Avatars, who must put his childhood ways aside and stop the Fire Nation from enslaving the Water, Earth and Air nations.