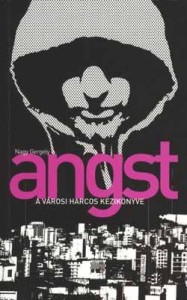 I feel angst, just by thinking of writing a review of Gergely Nagy‘s Angst – A városi harcos kézikönyve (“Angst – The Handbook Of The Urban Guerilla”). It is a such a multi-layered book, packed with so many ideas worthy to analyze that I know I cannot take the time to do it all. Here are some bullet points of random thoughts.

The main reason I liked the book was that it was jampacked with zillions of ideas that could be expounded. There are lots of quotes that would be worthy for analysis on their own. Here are some of my favorites.

All of these and many more are meaningful to me, and more thought provoking than a single storyline could be. There are hundreds of paragraphs like the above in the book. Which means I should and will go back to find them and think to what extent I agree with them.

Here are related links about the book. All links lead to Hungarian text, unless otherwise noted.