Last year I saw Jello Biafra with his latest band on March 1. Since then I’ve been only to two shows in the US (David J and Great Magnet/Angel Island) and to a  few more when I was in Hungary in May. I noted in October that there were a few shows coming up that I was interested in. The only one I manged to go was the SWANS this March 1. It was great and as usual I am more interested in describing my own personal experience than giving a straightforward concert review. 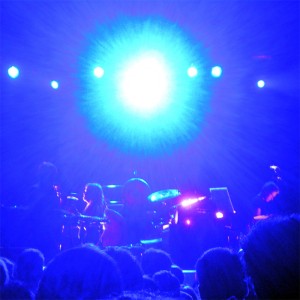 The show was set to start at 8 PM, and I wasn’t sure whether I should believe that. It was at a venue I’ve never been to (Regency Ballroom), so I couldn’t fully trust my own long standing experience that shows start at least an hour after the official schedule. I managed to leave from home in Sonoma county at 7 PM and got to the area of the show a few minutes after 8 PM. 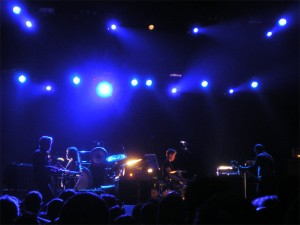 I had a problem though. I got unaccustomed to going out and staying up late. So before leaving for the city, aka SF, I had two cups of tea. By the time I got there I really had to use the facilities. I kept thinking that I would be fine, but I got really close to bursting and was concerned of an accident if it would take too long to find a parksing spot close to the venue. Fortunately I found a gas station and was more relaxed when I got real close. I was also lucky enough to find a spot on the street, so I didn’t have to shovel out $10-15 for parking. After I pulled in to the spot at the curb of one of those steep San Francisco streets a U-Haul (for non US people: a moving truck) pulled up next to me. I noticed that the driver had a hard time doing parallel parking on a steep street into a relatively small spot. So I did it for her. She was grateful and I was cheered up even more as I collected a few good karma points. 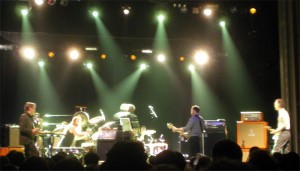 By the day of the show I got over my annoyance of the price of the night out. I was OK with the paying $30 for seeing a band I love. I even accepted the $8.85 “convenience charge” the ticketing company was charging, although I found it high. (I am not naming them on purpose, but the company is a big player in the online ticketing  field.) However I was really annoyed that after I gave my credit card info another $5.65 was added to the total as “order processing fee.” Altogether I paid $44.50 and that doesn’t even include shipping as it was a will-call ticket. When I walked over to the venue from my car at 8.20 PM and saw that I could have easily gotten a ticket right there, without paying all these extras, the cheap side of myself got upset. But my other, excited selves didn’t let that ruin the evening.

I got into the building and after a few seconds of orientation checked the booth for the merchandise. Beyond the posters, artwork and CDs they were selling t-shirts, including one in baby/toddler size. I was very tempted to get one for my daughter, but realized that the design (the cover of the band’s Filth album) may be too bizarre for her to like it, even if I did.

At the end I settled on buying a double CD for two reasons: it was signed by Michale Gira, the leader of the band and there was a sign saying that the CD is only available at this tour. On the way home I listened to the first of the two CDs and since then to the second one too and I am happy that I got them. However my original two reasons for purchasing them didn’t stand long. Gira’s signature was a bit washed away as he  must have been signing dozens or hundreds of items in one sitting real fast. Plus the CDs can be purchased at his site and those copies are signed too. Having said that: I recommend the “My Father Will Guide Me Up a Rope to the Sky” CD: It’s like a mixture of classic SWANS and newer electrofolk style. The first disc is the regular CD that you can also buy on its own, while the second  contains themes from it heavily modified stretchd, distorted and tortured in other ways. (The “Yes/No” images are from the cover of the CD.) 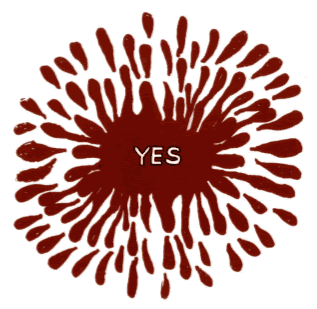 After dropping off my coat in the cloakroom I entered the concert hall at 8.35 PM. Just in time to catch the last two songs of Wooden Wand, the support band. A half an hour break followed them so Swans could set up its gear. Around 9.15 PM the lights went out and some slow/low noise started.This went on for 15 minutes with little but noticeable variations, and with ever slightly increasing tempo. I wasn’t entirely sure whether we were listening to the instruments or the speakers generated sounds or there was a human involved in modifying the sounds. Everyone once in a while I saw a person in the dark part of the stage, so I decided that it was the latter.  Then I saw a second person entering the stage and he was playing on an instrument with two mallets that occasionally lit up. The two of them played for another 15 minutes or so and that’s when the rest of the band got on stage. Thus a 30 minute sound experiment opened the show. Towards the end it sounded like as if Test Department would play Philip Glass themes. Great combination. 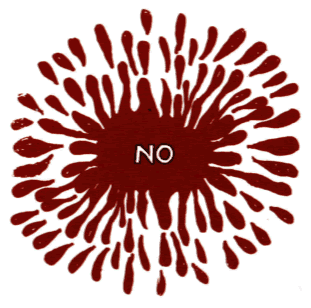 Then the band played a good 90 minutes long show. I only recognized 3 or four songs, despite being quite familiar with their repertoire. Listening to the new CD after the show confirmed my suspicion that the rest of the numbers were new material. Here are some comments/observations about the show itself

This next point should have been just another bullet point above, but I have to say this separately: Thor Harris was amazing. He was one of the two guys (yes they are all guys, no Jarboe in this incarnation of Swans) who never played with the Swans before. He, as a multi-instrumentalist, was a brilliant new addition. I’ve never seen anybody playing a vibraphone with a violin bow, or switching from one instrument to another with swift efficiency or from one mode of music to another. These and him playing various winds and strings too proved he is not “just” a percussionist. I really liked what he added to the sound. I am ready to check out his other, pre-Swans recordings.

I don’t have much more to say about the music itself. It was brutal where it had to be and more peaceful at other times. I loved that they embraced their experimental side too along with more traditional song structures. It was also eerily great when Gira was singing on his own without heavy band accompanying him. Overall I  had a great time, happy that went. I probably used up my karma points gathered earlier on my drive home. It was raining heavily and I was very tired/sleepy. But got home safely without a problem.

The photos mixed into this post are pictures I took. These are the better ones, so you can imagine the rest. They didn’t come out very good, because I was standing too far and didn’t have a tripod. But they will serve me as aiding my memory remembering this concert. Click on the pictures to get to their much larger version. I also recorded 17 minutes of the show as low quality audio . You can listen to it below or download it.

I only recorded the very last, encore song on video, embedded below.  To round up this post here are some links to further videos of this particular show.