Last week I watched on one day all three of the Millenium movies. They were depressingly good.

In case you missed the phenomena: Stieg Larsson, a Swedish writer wrote a trilogy of books, which were very popular a few years ago in English too. The titles of the books were: “The Girl with the Dragon Tattoo

“, “The Girl Who Played with Fire

“, and “The Girl Who Kicked the Hornet’s Nest

“. I just learned from wikipedia  that the direct translation of the first’s book’s original translation is “Men who hate women”. This pretty much summarizes up the message of the books, but they were much more. For example they were pageturner thrillers depicting of society and systematic abuse of the powerless. 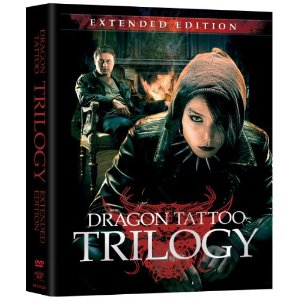 ) were done a few years after the author passed away in 2004 together by a Swedish and Danish company. The films follow very closely the books as far as I can tell. They had to omit of course a lot for brevity’s sake, even as the filmmakers prepared a TV miniseries first. What they managed to include in the films, was exactly how my mind’s eye imagined it while reading the books, with two major differences. Both the rural and the urban scenery was much more beautiful for me than I would have thought based on the books. I have some memories of Sweden, even though I spent very little time there and my last trip was 23 years ago.  But what I saw in this movie made me want to go back to this gorgeous country.

The other difference between the books and the movies was that I thought the main character, Lisbeth, was supposed to look much younger.  Don’t get me wrong, kudos go to Noomi Rapace,  the actress who played her, as she did an excellent job. But reading the books I imagined her like a teenager. Rapace was 29 years old, when the first movie was shot and she was supposed to play a young looking 24 year old. She looked older.

Movie viewing is a personal experience, right? Then I cannot leave out that I was very much aware that while I was watching these movies the Hungarian House was “debating” whether they should create a law about spousal abuse. The short version is that the current, conservative government made a sham out of the idea, by

What they didn’t anticipate was the extent of the stupidity and male chauvinism of those who rose to speak. Instead of addressing or even acknowledging the severity of violence against women, they quickly got to the “Kinder, Küche, Kirche” idea, that reduces women’s responsibilities to childbearing, household and religious matters. I can sympathize a little  with these Hungarian representatives who were concerned about the diminishing size of Hungarian population. But telling women that they just have to keep having babies, BEFORE or INSTEAD they are allowed to do whatever they want to, and preaching this in the context of talking about how men abuse, beat and kill their wives is unacceptable.

Now you know why I brought it up in the context of these movies. It is precisely the attitude shown by these so-called conservative and christian representatives that led to the murders of the women in the Millenium trilogy. But the books are fiction (inspired by true events), while what happened in the Hungarian Parliament is the tragic reality of contemporary Hungarian politics. The good news is that the voice of the people (and the wives of said representatives) became so loud that the government decided to change its course on the topic and will actually devote some real energy to think about it.  Eva S. Balogh summarized well what happened the following days.

Meanwhile I remain with haunting memories of the movies and hoping that based on Larsson’s manuscripts there will be a fourth book and eventually a movie. More importantly I hope that there will be some positive change first on the legal level and years or more like decades later may be on the societal level about how to treat women (and men too): respect and appreciation.