Today’s connection* is between a book and an article. 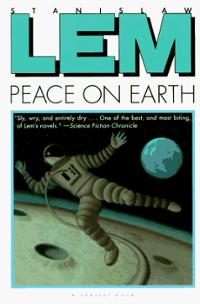 One of the books I am reading is Stanislaw Lem‘s science-fiction piece “Peace on Earth“ from 1987. In it he envisions a future where warfare’s methods, locations and even actors are different. One detail of Lem’s complex vision is that because war machines are becoming more and more expensive only superpowers can afford them and even they only in limited numbers. Another aspect he predicted was that due to the increased pace of automatization “robots” (really, any sophisticated non-human machines) will do the actual fighting and then later will be in charge of strategy too.

As I was taking a break from reading it this article popped up on my screen. It is from Business Insider, summarizing a Credit Suisse‘s research paper titled “The End of Globalization or a More Multipolar World“. It is a fascinating and mostly depressing document. The BI article includes this quote:

“The growing automation sector could lead to robotics warfare, which will lower casualties and the risk to human life. It could also make war seem less costly than it is now, since robots are more replaceable than people.”

Lem’s novel from 28 years ago and the fresh report provides an interesting contrast. They both agree that there will be less humans on the frontlines of war. But they diverge on the cost aspect. Lem didn’t put a figure in his calculation on the value of human life and for him the cost of a few** big machine would result in the overall rise of expenses for war. But if you consider that robots are easier to replace and the cost of production is continuously going down robotic warfare is getting cheaper. That is a scary thought for me because we humans proved that if something is cheap we are more willing to use/abuse/waste it. I wish war would be so expensive that everybody would see that it is such a waste that could be spent better on constructive problem resolution and resource allocation.

** In Lem’s estimate a superpower would be able to afford on 18-22 of the top of the line war machines, while other none or only a few.