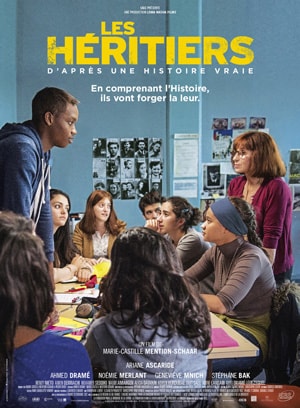 If this is the first movie you saw in the genre of “rambunctious and diverse class of teenagers encounter an inspiring teacher and through a transformative experience come together and change for the better” you will really enjoy it. But if you’ve seen one or more of this type you will find the storyline a bit predictable. The “experience”, this is quasi-remedial class goes through is the participation in a national contest and creating a presentation on the topic of “Children and adolescents in the Nazi concentration camp system“. Almost all of the kids, many of them Muslims to various degree, end up getting interested in the topic and not just set aside their differences, but work together to create their collective project. This is admirable, but my skeptical mind found it unrealistic, that only one and a half student of the whole class opted out. (Even the “one” gets a positive nod at the end and the “half” ends up joining the group halfway through.) Looks like the filmmakers took the perspective that peer pressure is so strong that almost nobody wants to be in the “outgroup”.

I was a bit confused on how old these kids were supposed to be. In the opening seen we saw two students who (more or less) graduated and they were talking about their “baccalaureat”, which in my mind converted to a BA, the degree that in the US most students get after finishing a four year college. Then we saw the new class, and most of them looked about 18 years old to me. But their maturity level was much lower than that of college students. So I had to check and confirmed that “Lycée“, the type of school this movie is set in is a form of secondary institution, i.e. high-school. Don’t be fooled who old these kids look like. They are supposed to be 16-17-ish.

There are good reasons why they looked so old. First of all the “actor”, who played Malik, one of the students, was 20, and was actually part of the class, based on whose true story the film was based on. He, Ahmed Dramé, wrote the script based on his own experience. Second, many of the youth in the movie was played by students of the Lycee it was shot in. Third they were not freshmen, but in the “junior” class which is the same in the US system, the third year of high-school.

There are numerous subthemes such as the French national debate on religious clothing, diversity of personal background in terms of family and socio-economical status, questions of respect and authority, self-confidence and of course the issue of how to teach Holocaust. The latter was helped by a Shoah survivor, who played himself, Leon Zyguel. As part of his teaching he read to the class the Buchenwald Oath, that many in that concentration camp took. It partly reads:

We will take up the fight until the last culprit stands before the judges of the people. Our watchword is the destruction of Nazism from its roots. Our goal is to build a new world of peace and freedom. This is our responsibility to our murdered friends and their relatives.

Thus a main message of the movie is that this task is perpetual and every generation has to take it up.

* As a member of the committee helping to put on the Jewish Film Festival, organized by the Jewish Community Center, Sonoma County, I preview movies to help decide which ones to play at the Festival. I watched this movie as part of this volunteer effort.