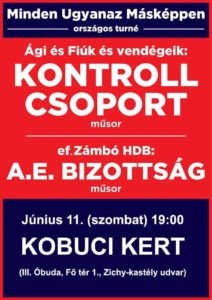 In the early 1980’s, when I was a teenager, A.E. Bizottság (Albert Einstein Committee) and Kontroll Csoport (Control Group) were among the the top underground bands in Hungary. Going to their shows was the highlight of my week/month. Both bands disbanded by the mid 80’s, but most members kept playing music in newly formed bands. Last week two of these bands played a sort of reunion show in Budapest I managed to go to. It was the last stop of their mini tour.

First up was ef.Zámbó Happy Dead Band‘s interpretation of Bizottság songs. I have to admit the set didn’t serve well my hunger for nostalgia. ef.Zámbó was the keyboard player of the band and his band, with rotating membership has been around for 30+ years too. His music is too funky for me and lacks the raw energy of Bizottság. The young singers on stage couldn’t compare to the outrageous quality of the originals. Also, there were no other original members of the band playing on stage. There was a guest (Víg Mihály, of the band Balaton) for one song though. The first three songs they played weren’t even Bizottság, but HBD. I captured the other 12 songs on video, see the playlist and the videos below.

Next up was Ági és Fiúk (Ági and boys), the “new” band of Kontroll Csoport’s singer Ágnes Bárdos Deák . They played a song first which was not of Kontroll and the lyrics sounded like a traditional folksong, not even their original. It set the mood though for inviting on stage Kontroll’s original guitar player, Csaba Hajnóczy . (The original drummer and the saxophone player passed away.) From then on they pushed a great set. I only videod the first two songs, then went to dance at the side of the stage where there was more space to do so. I captured one more song (badly) from there too though., which was sang in Polish. They also had a guest for one song: Jenő Menyhárt (of URH and Európa Kiadó) to sang one of the unofficial anthem of the era (Bon Bon si Bon).

It was raining on and off during the second band’s show and afterwards, but it didn’t disturb me or the crowd. Also, I stayed after the show and danced till 1 AM for a mixture of songs from the old Hungarian underground and its era. It was a great night, one of the most liberating I had in years.

The setlist of the videos below

And here the 16 videos