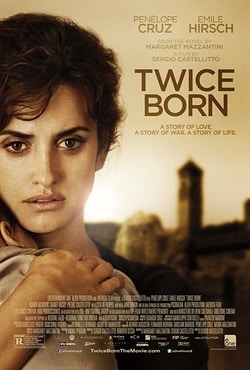 Bridges are multi-edged metaphors. In peace time they symbolize connections; we like to “build bridges” between people, cultures, seemingly disparate or even opposite fragments of the world, to emphasize the common ground. In wartime though it shows that there is no common ground under the bridge. Instead their symbolical meaning gets reversed. What once was a fragile road towards the and each other now becomes the place where nobody is protected. When you are on a bridge there is nowhere to run from a sniper. Nowhere to hide. By committing the brave or foolish act of stepping onto it you expose yourself to possible enemy fire.

Twice Born, with Penélope Cruz, painfully drives the point home, by showing both the way to the famous Mostar bridge, which was a symbol of multicultural understanding to the slaughtering of innocent people on various bridges. The symbolism gets even worse and stronger. As we learn towards the end of the movie the main surviving characters of the war live on an island. No bridges leading there, only ferries. They didn’t want to burn the bridges up behind themselves, but their country did it for them. The only more or less safe refuge they found was strictly off-coast.

From now on, in my musings about movies and books I will pay extra attention to religion, technology and society. I believe every piece of artwork has something to say about them. Let me test this theory by pointing a few connections out.

Religion barely plays any role in the movie. At one point we learn about a couple, both of them university professors, where he is Jewish and she is Muslim. This fact is unceremoniously mentioned in passing and the point is to show that for being a loving couple they doesn’t have to be co-religionists. Much later when the bohemian photographer lost his joie de vivre and helps distributing food and supplies to people in a vest that bears a cross on its back, his scared wife compares him to a desperate Jesus figure. Yes, just like Jesus, he abandoned his self-preservation instinct in favor of helping others. For those who love him as a person it was hard to take.

What kind of pictures does the movie paint of human society? It is a war-story with its specific horrible atrocities. Hence it is best summarized by the words of a doctor, who after examining one of the victims in the movie says: “Her… orifices will heal slowly. It will take some time. I am ashamed to belong to the human race. God will not forgive us. Not even the children.” The things humans are capable of are seemingly unimaginable. The trouble is that some humans not just imagined but executed those atrocious crimes.

Everything is technology. The word’s meaning move on a large scale. Let’s narrow it down to man-made objects. For simplicity’s stake–and because that is one of my man interest–let’s further narrow it to computer technology. It only comes up in the very last scene, which is yet again a nice bridge between past and future. It is suggested to the 17 year old innocent boy, who was born twice, that the war should be explained to him by a comedian like Buster Keaton. So, on his way out of the island and the movie he snaps his cell-phone out and starts watching a Keaton film. New technology used by a new generation suggests progress and maybe, just maybe that he will grow up with more connecting bridges than killing fields. Also, him connecting to a classic oldie also gives hope that by studying history he and his generation will not repeat it.