More then four years ago The Juke Joint presented a great evening with 3 bands and a circus in Sebastopol’s HopMonk Tavern (in Northern California, not in Russia.) Two of the bands were Diego’s Umbrella & El Radio Fantastique. I recorded most of their show and just (re-)posted it on YouTube. Enjoy! 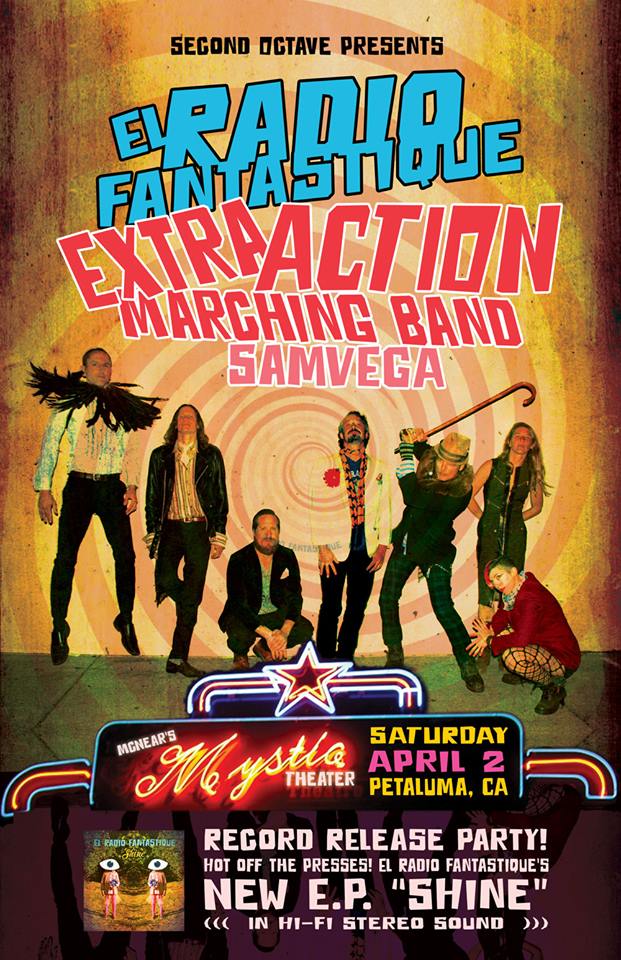 One of the wildest concerts I’ve been to was by Crash Worship‘s sometimes in the late 1990’s in San Francisco. It had drummers hanging over the audience, firecrackers, and a topless women throwing honey and grape and other food items into the crowd while being carried around on a big board. In the mid 2000’s, when I realized that Crash Worship disbanded I found at that some of them, mainly Simon Cheffins, formed a band that is similar to some extent: Extra Action Marching Band. Ever since then I wanted to go to one of their shows. They played January 1 in Oakland but I didn’t make it there. However last Saturday they had a gig in Petaluma’s McNears’s Mystic Theatre, so finally my wish came true.

There were two support band, but I missed the first one. I arrived in the middle of El Radio Fantastique‘s set. I’ve seen them once, a couple of months ago and they were just as fun then as now. (At the end of the video playlist down, you can listen to four of their songs that I recorded.). During their song members of Extra Action Marching Band came on stage and joined them. It was quite ecstatic. It seemed that the main attraction of the night didn’t need amplification, as there was not set up time and they just jumped into their set. As you can see below they played about half of their set interspersed with the audience. Beside wind instruments and percussion they had pom-pom girls and boys and flagwavers. It wasn’t as wild as Crash Worship, but it was still rather rapturous. I videoed most of their show. After I stopped they payed a few more, but I decided I want to join the show instead of just observing it. Next time I hope to take my wife to it too.